Ovarian cancers, any of several types of malignancy that begin in the ovaries, are extremely hard to diagnose early. In fact, the vast majority of women with ovarian cancer are diagnosed after the disease has spread beyond its site of origin. That makes treating ovarian cancer a serious challenge, one that usually includes multiple techniques, from surgeries that “debulk” primary tumors to regimens of systemic chemotherapy.

Ovaries play a fundamental role in human reproduction. Two fundamental roles, actually. These mirror-image organs, which sit on either side of the uterus, are considered gonads, structures tasked with producing the germ cells, or gametes, that will ultimately develop into a new organism under the right circumstances. But beyond creating and releasing ova, or eggs, the ovaries manufacture most of the “sex hormones,” including estrogen and progesterone, that control the development of secondary female sex characteristics (enlarged breasts, wider hips and pubic hair) in puberty. 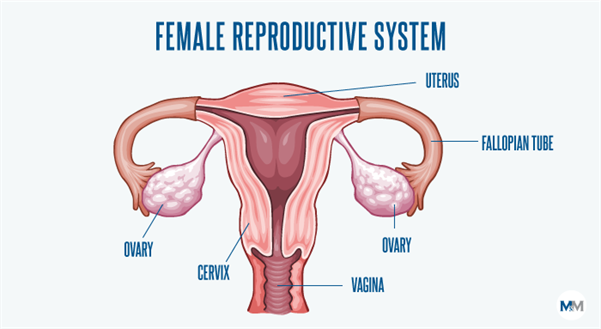 While we tend to associate these hormones with pregnancy, they’re actually active all the time, maintaining pre-menopausal fertility by regulating the ebb and flow of menstruation. Of course, the ovaries really go to work during pregnancy, when estrogen and progesterone are necessary to prepare the body for sustaining a second human life. Progesterone thickens the uterine lining, creating a cushy surface for a fertilized egg to burrow into, and later, the hormone will also promote the development of mammary glands in the breasts.

Our discussion of ovarian cancer begins here, at the cellular level, deep within the structure of the ovaries. In broad terms, an ovary is made up of three different types of cell, each with their own specific function:

While each of these three cell types can become cancerous, cancers that begin in epithelial cells are far and away the most common. These forms of cancer are often referred to as “carcinomas,” and according to the American Cancer Society, around 85% to 90% of the ovarian cancers diagnosed in America are epithelial carcinomas. Most of these patients, around 70%, are over the age of 65. As we’ll see, age is a major risk factor for developing ovarian cancer, perhaps even more so than for other types of malignancy.

On one level, every cancer, no matter where it begins, is caused by the same thing: genetic mutations. Cancer is fundamentally an alteration in the way cells behave, and because the behavior of a cell is ultimately determined by its DNA, its genetic material, we can assume that when cells begin behaving abnormally, something has changed their genetic instruction manual.

Mutations can be completely spontaneous, since cells are always dividing, creating two cells where there once was only one. Every time a cell divides, it first has to copy its DNA, so an identical set of genetic instructions are transferred to the new cell. But this process is rarely fool-proof, and minor mistakes in the copying process can have a major impact on how new cells behave. Only specific mutations, however, seem to change cells into cancerous ones. That’s fairly intuitive, since cancer involves specific changes in the way that cells behave.

For one thing, healthy cells don’t continue living indefinitely. During cellular division, the chromosomes to which their genetic material is bound actually get shorter. At a certain point, the chromosomes become so short that further division is no longer possible. The cell dies, making room for new ones. But cancer cells, by dint of a mutation, have found a way to outlive this natural limitation – by physically rebuilding their chromosomes after divisions.

Healthy cells also play nice with other cells. Cells are always talking to one another, especially their close neighbors, through a complex system of chemical messages. When one cell seems to be overstepping its bounds, dividing too often and allowing its children to take up too much space, surrounding cells will tell the petty tyrant to stop. Cancer cells, on the other hand, have figured out how to drown those incoming messages. Eventually, the petty tyrant becomes a real dictator.

On a side note, Human Papillomaviruses don’t seem to cause ovarian cancer. Several strains of HPV can cause cervical cancer, along with fairly rare vaginal and vulvar cancers.

Most cells, in a very real sense, are communal. Stray too far from the pack, and some cells will actually kill themselves, committing suicide in a process called apoptosis. As metastasis makes clear, cancer cells aren’t bound to filial relations like healthy cells. They can spread, far and wide, using the lymphatic system and circulatory system as a fluid transportation network. The dictator begins to colonize new territory, lands already occupied by other, healthier settlements.

Ovarian cancers, though, don’t usually spread that far. Cancer cells that begin in the ovaries rarely reach the blood stream, Ernst Lengyel, a gynecologic oncologist at the University of Chicago, writes in his excellent overview of ovarian cancer metastasis in the American Journal of Pathology. In limited cases, ovarian cancers can reach lymph nodes, of which there are many throughout the pelvis, and use this alternative network of vessels to travel far afield. But in most cases, an “advanced” case of ovarian cancer means one of two things, according to Lengyel:

This is when most ovarian cancers, around 67%, are diagnosed, according to the National Cancer Institute. Of course, cancers that have metastasized are much harder to treat than early-stage malignancies. But why are we so bad at catching ovarian cancers quickly?

We’re bad at catching ovarian cancer because the disease almost never presents symptoms, at least until it’s all but too late. In the event that an ovarian tumor does cause adverse effects, and those effects can be perceived by a patient, they’re usually the result of an ovarian tumor, likely advanced already, pressing on other organs in the pelvic region.

Obviously, these are what doctors call “nonspecific” symptoms. But we aren’t totally in the dark. True symptoms of ovarian cancer usually follow a fairly specific pattern, at least in terms of how they occur:

Still, an extraordinary number of different medical conditions can cause any one, or a combination, of these symptoms.

True to form, ovarian cancer is frequently misdiagnosed for benign conditions, often ones far more common than a malignancy, like constipation or irritable bowel syndrome (IBS). Misdiagnoses involving IBS are particularly common, since irritable bowel syndrome itself is incredibly common, affecting around 10% to 15% of people in developed countries.

How Often Is Ovarian Cancer Misdiagnosed?

This is a question on which we have few accurate statistics. We know that misdiagnoses in general are extremely frequent. But for ovarian cancer specifically, we don’t have very much rigorous research. Recent surveys, however, have shined a light on this poorly-understood problem, with troubling results.

In one poll, the National Ovarian Cancer Coalition sent a simple questionnaire to 250 women currently battling ovarian cancer. Over two-thirds of the women said they had been initially misdiagnosed by their doctors. Physicians commonly “dismissed” their symptoms, abdominal or pelvic pain and bloating, as the results of a benign condition:

Almost 70% of the misdiagnosed patients said their doctors never even raised the possibility of ovarian cancer. Now we know that their doctors were flat-out wrong. Many of these women have now become champions for ovarian cancer awareness, but about 55% said that undiagnosed women aren’t any more knowledgeable about the disease than people were five years ago.