Colorectal cancers are extremely common, the third most frequently-diagnosed malignancy in US patients, according to the National Library of Medicine. But the disease is also very deadly. Colorectal cancer, which most often metastasizes to the liver, lung or abdomen, is the second leading cause of cancer deaths.

Colorectal cancer can start in either the colon or rectum, two segments of the large intestines. After food has been broken down, by acids pumped out in the stomach, it moves on to the small intestine and then the colon, a six-foot long tube arranged in a roughly rectangular shape underneath the stomach. 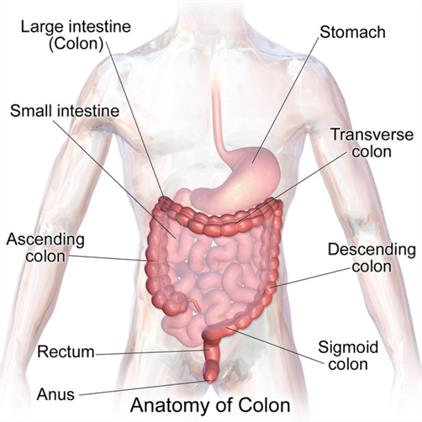 The colon isn’t really crucial for extracting nutrients from the food you eat. That’s the job of your stomach and small intestine. Instead, the colon is essential to preparing those foods, after the nutrients have been removed, for their eventual elimination from your body. Strong muscles that line the organ move the food, which is now called “chyme,” along four arching sections of the large intestine:

Throughout this movement, the colon itself is busy removing liquids and salt from the chyme. In fact, when what will eventually become poop reaches the ascending colon, the first part of the organ, it’s really just liquid. The colon’s job is to turn that liquid into a solid for excretion.

Several nutrients, including vitamin K and vitamin B12, are gathered at this point, but we need bacteria to do it. As the chyme travels through the colon, it’s mixed with bacteria and mucus. The bacteria, of which there are between 300 and 1,000 different species, live on still-undigested nutrients in the chyme, producing as a byproduct of their feeding process a host of valuable nutrients that can be absorbed by colon tissue. The mucus coats the walls of the intestines, helping chyme move along and protecting intestinal tissue from the ravages of stomach acids.

This is where colorectal cancers usually begin, in the glandular cells that produce mucus. Like all cancers that begin in gland cells, these malignancies will be classified as adenocarcinomas. The majority of these cancers begin as benign tumors, called polyps, which develop on the lining of the colon.

While there are several different types of polyp, and the differences between them are crucial to understand, every one of these benign growths begins in much the same way.

Healthy cells divide, grow to maturity and then die. Usually, this process is highly-efficient and orderly. Cells don’t normally outstay their welcome, and around 50 to 70 billion cells die everyday in the average human body. But each one of these cells must be replaced, by immature cells that are themselves the result of prior cell divisions.

In a very real sense, cells are constantly copying themselves to create new cells, and the most important part of this copying process is the replication of genetic material. But every time a cell divides is a new opportunity for mistakes to made in the copying of genetic material. Some of these mistakes override that highly-efficient, orderly process we described above, in which cells grow and die, making room for new cells. The cells that make up polyps, for example, don’t mature properly, so they never get to the point at which they would die. Instead, they cluster together, eventually forming a tumor that we call a polyp.

Polyps come in many shapes and sizes. For our purposes, adenoma or adenomatous polyps are most important because they’re most likely to become malignant.

There’s A Lot You Can Learn From A Polyp

Adenomatous polyps come in two basic varieties, based on how the immature cells organize themselves inside the tumor:

As with most cancers, the only way to definitively diagnose a colon cancer is through biopsy, by removing potentially-malignant tissue and inspecting it under a microscope. But we can’t biopsy any suspicious growth until we know that something is wrong, and the widespread use of preventive screenings, like colonoscopy and sigmoidoscopy, have been instrumental in decreasing colon cancer death rates over time.

Caught early, malignant colon growths are relatively easy to treat. That’s something you won’t hear said about most types of cancer, but it’s true in the case of colorectal tumors. Early polyps can be removed surgically. Often, that’s the only treatment necessary, according to the American Cancer Society.

When colorectal cancers begin to metastasize, or spread, they tend to colonize the intestinal walls first. Surgery is still the first-line treatment at this point, although doctors may have to remove a larger portion of the colon, beyond the polyp itself, in order to take all of the cancer cells out.

Once cancer has invaded the colon wall, but before it’s reached nearby lymph nodes, surgeons will likely remove a portion of the colon along with those nearby lymph nodes, just to make sure they aren’t eventually colonized by the cancer. Chemotherapy may be used after surgical removal, but this is fairly controversial for stage II colon cancers.

In stage III, the cancer has spread to nearby lymph nodes, and presents the risk of traveling through the lymphatic system to distant organs. The standard treatment remains surgery and systemic chemotherapy, although the chemo becomes obligatory. If allowed to spread further, colorectal cancer normally colonizes the liver next, though it can reach the lungs, abdominal cavity lining or distant lymph nodes as well. Surgery is unlikely to help in this situation, although it can be attempted if the far-flung cancers are relatively small. Systemic chemotherapy is more apt to be the treatment of choice.

Theories about why this seems to be the case are still coming, but one is diagnostic. Most colon cancers begin as benign polyps and, with early diagnosis, polyps can be removed, drastically decreasing the risk of a patient developing cancer. But polyps that grow on the right side of the colon are usually flat, unlike the mushroom-shaped, and relatively obvious, polyps that tend to grow on the left side. Flatter polyps are harder to spot on colonoscopies, which means people with right-sided abnormalities are often diagnosed later and thus harder to treat.

We’ve reported before on the “incredible” rise in young patients being diagnosed with colorectal cancers recently. Diagnosis rates among patients under the age of 50, when the American Cancer Society suggests patients start undergoing routine screenings, increased by around 1.5% every year from 1992 to 2005.

Several theories have been proposed to explain the skyrocketing numbers, including increases in the rate of diabetes and obesity. But diagnosis may be the key. It’s quite possible that doctors have simply become better at diagnosing colorectal cancer, once thought a disease confined to older patients, in young people. And just like survival rates, misdiagnoses of colorectal cancer may come down to the side on which a tumor begins.

Stephanie Guiffre, director for the Never Too Young Coalition, says that younger patients with colorectal cancer are misdiagnosed between 15% and 50% of the time. Often, it’s because doctors associate colon cancers, at least in young patients, with a genetic disorder called Lynch syndrome. Instead of looking for signs of colon cancer, they look for signs of Lynch, despite the fact that only around 25% of young patients with colorectal cancer have the genetic syndrome. Even more problematic, Lynch syndrome almost always causes tumors to develop on the colon’s right side. In young patients without Lynch, polyps develop more often on the left side.